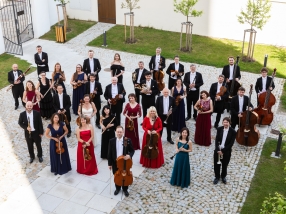 The South Czech Philharmonic, based in Ceske Budejovice (Budweis), was founded in 1981; its original name was The South Bohemian State Orchestra. At present it comprises of 39 artists and remains the only professional philharmonic orchestra in the South Bohemian region.

Origins of the orchestra are associated with a Czech conductor Jaroslav Vodnansky; subsequently, the position of Chief Conductor was held by Ondrej Kukal, Bretislav Novotny, Jaroslav Krcek, Stanislav Vavrinek and Jan Talich. The current Chief Conductor, Miran Vaupotić, has been leading the orchestra since 2021.

Besides interpreting the music of classical composers and pieces appropriate for chambre orchestras and smaller concert halls, the Philharmonic is dedicating increasing attention to the contemporary trend of interlinking genres and discovering new perspectives of both interpretation and presentation of music, and systematically strives to enhance its qualities. The majority of SCP members are young, ambitious, skillful and promising musicians, appreciating any opportunity to cooperate with other leading conductors and soloists.

At present, the South Czech Philharmonic aspires to maintain the interest of existing attenders, while focusing on a younger audience and wider public and thus attracting those South Bohemians who have so far been more or less indifferent to classical music. There can be no doubt that the orchestra has a sufficient capacity, enthusiasm, and the right direction to achieve all of that. 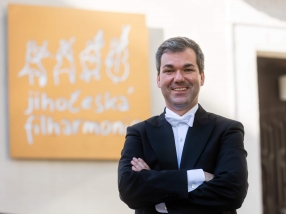 He also premiered several operas including Waundell Saavedra’s Sweet Dreams, John Rose’s Rumpelstiltskin directed by Tyler Bunch (The Muppets) at The National Opera America Center in New York City, and Jelka by the late Croatian composer Blagoje Bersa, bringing the piece to life a century after the influential composer’s passing.

As a recording artist Vaupotic released albums with Naxos, Classic Concert Records and Navona Records. In 2015 he was honored with the Gold Medal at the Global Music Awards in California (USA).